Appaloosa Mare Appaloosa Mare - approx 11 years old?  Purchased because she had fear issues and bucking when mounted. No other history available. I can't see a brand.  14.3 hh? Not a child's pony.
​
When we first got Kachina, she could not be caught in the paddock and had to be lured into the round yard with feed.  She was very reactive and could not tolerate when we tried to lift her front legs to file her hooves.  She cow kicked in order to prevent us from lifting the hind legs, so we decided we really had to go back to basics and build trust.

To assess Kachina, we got feedback from a competent horseman who rode her.  He assessed her as good to ride after they got moving, but mounting and first few steps is an issue and the mare is liable to pig-root.

We noticed that Kachina is very reactive to the mounting process as this is what caused her pain previously from an ill-fitting saddle combined with the rider mouting from the ground.  We are using a mounting block now but Kachina can't be expected to understand that the saddle won't hurt her anymore.   We have to demonstrate that to her.  This would be easier to achieve if she didn't have very strong fear issues related to unfamiliar people.  So our first lessons have all been centred on building trust.

Kachina is not a nasty horse with us at all, but is willing to please.  She has been receiving massage therapy on her poll, neck, shoulders and withers and she no longer reacts as if she is sore. When receiving therapy on her neck, if previously we touched a sore muscle, she would react by make a nipping sound with her lips but she never nipped us.  She gave a lot of releases with yawns, stretches which were great signs to see. She began to trust me and put her nuzzle into my shoulder and arm as a kind of 'thank you' when the releases happened.  She seems very keen to bond to me.

We thought Kachina had a dominant nature to other horses, but it seems we were wrong.  She is dominant over the 3 geldings in her herd, but she is the lowest ranking mare in the herd.  She often lets another mare's foal eat with her at feed times too.

We were told that this mare floated well, but have not tested her ourselves yet and I seriously doubt that she would float well, but we will work on that too eventually.

Kachina Progress - 30 April 2019
Trust issues from previous abuse. At liberty accepts whip, noodle and glove. Has since learned to target the glove and responds very well to clicker-training. Is now following the glove at liberty (video coming).
Accepting weight on back from both sides at liberty
Lining up at the 'mounting block' at liberty
Allowing me to touch her hind legs and posting her front legs at liberty
Surprising to find she is affectionate underneath all the fear and she often seeks out bonding opportunities.

​Kachina, appaloosa mare. 11 years? Had sore withers from ill-fitting saddle. Rider mounting from the ground caused mare to pig-root before the rider could mount completely into the saddle. We bought the horse from the previous owner, knowing she would need some gentleness to restore trust.  We gave her massage therapy over several weeks then a qualified Horse Riding Coach and jockey worked with the mare.  This video shows the beginning of the retraining process which was to have the mare stand still and walk off without pig-rooting. We would usually use the buck-stopper for this as a safety measure, but sadly our cob size buck-stopper was loaned to another person who failed to return it.  Also we didn't have access to our custom built mounting block on this day either, so we opted to use a hopple on Kachina's leg.  The strap put the mare at a disadvantage to pig-root and was only necessary for a few minutes. This mare is eligible for rehoming. Located Bundaberg, Qld, Australia. Not registered and not able to be registered as we don't know the mare's pedigree. NOT A CHILD'S PONY.  NOT A BEGINNER'S HORSE. EXPERIENCED KIND, (SOFT-HEARTED) RIDERS ONLY.   Appears the mare has got good cow-sense.

Kachina Progress - April 2019
Trust issues from previous abuse. At liberty accepts whip, noodle and glove. Has since learned to target the glove and responds very well to clicker-training. Is now following the glove at liberty (video coming).
Accepting weight on back from both sides at liberty
Lining up at the 'mounting block' at liberty
Allowing me to touch her hind legs and posting her front legs at liberty
Surprising to find she is affectionate underneath all the fear and she often seeks out bonding opportunities.

Update:
11 November, 2019
After trying to ride her to see if we could just get over the mounting problem, we left off riding her and then went back to basics in building trust. Clicker training, with its reward for the horse, made all the difference. It was the best move. She is more calm and seeks us out now. No more chasing her around the paddock trying to catch her.

Kachina has shown she likes to connect with gentle people and often comes up asking for a neck massage, gently pressing her muzzle into my shoulder.  She's asking to connect and I think she feels more secure knowing there is a bond between her and a trustworthy human.   This is a huge psychological move on Kachina's part and a long way from the terrified mare who would not allow a human to go near her, running away, not allowing herself to be caught or touched even to take food, when we first took over her care.  She now lines up on at a mounting block and comes up freely to us in the paddock, cautious, but she comes at liberty of her own choice.
9 Jan 2020
Kachina is learning to trust others.  She does the line up, picking up her front legs, following and touching a target and responding without fear to a whip used by another person (Megan)  who she met and interacted with for the first time. on the previous day. This is evidence of further progress in Kachina's rehabilitation.

If you are interested in providing a long-term, forever home to a rescue horse, please let us know via our contact form. 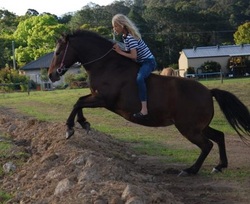 Rehabilitated founded pony - not for sale.