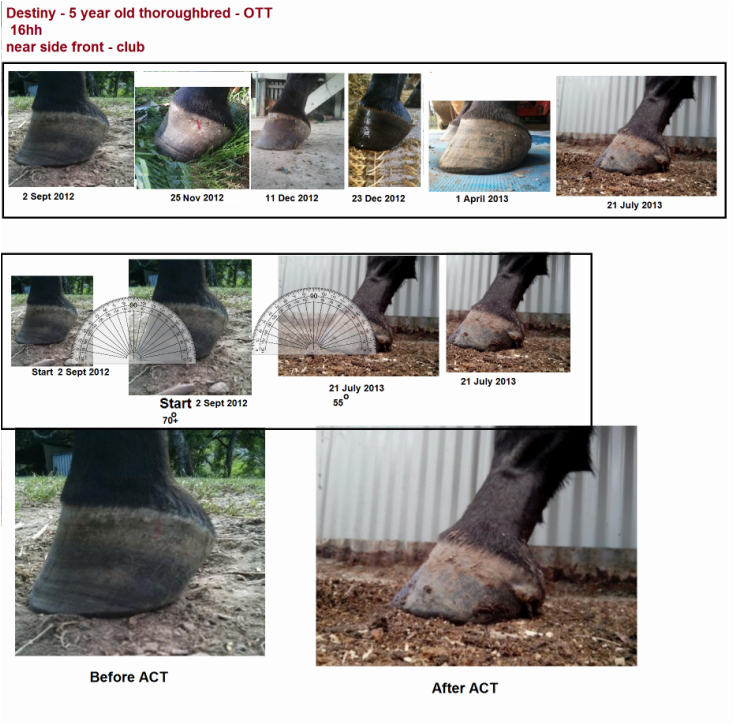 These are before and after photos of the left front club hoof of a 5 year old OTT (off the track Thoroughbred) mare which were taken over a 9 month period. (2 Sept  - 21 July 2013). During this time, bi-fortnightly trims were performed. Initially the dorsal wall was 74 degrees which gradually changed to being less upright - 68 degrees after the 6th trim and 55 degrees after 9 months of trimming.  Initially the hairline was very jammed and the heels contracted with no frog/ground contact, the frog being pushed up into the foot. This revealed that the internal hoof capsule was very cramped together - digital cushion pushed high up inside by the bars, crushing the lateral cartilages - with the internal hoof capsule being cemented in abnormal position by excess sole and causing the jamming of the hoof wall into the coronary bands.  The coffin bone was out of the toe stay and tilted toward the sole.   The colateral grooves were abnormally curved inside the hoof due to impacted bars and these misplaced, hard structures made it very painful for the mare to stand on her heels.  Work is continuing on this hoof but is now aimed toward massage of the shoulder, neck and wither muscles.

9 year old mare,  chronic recurring founder in all 4 hooves.  All 4 hooves presented with so called, "Fever Rings".  These rings are actually compression rings and they warn that the hoof is not properly supported internally.  This pony founded in all four feet in November 2011.  The founder was so severe that the mare could not walk, constantly moved her weight from one leg to the other and laid down for lengthy periods.  Her coffin bones did not sink through the bottom of the sole but were close to doing so.  The mare's hooves were trimmed, cast and her food was adjusted.   She was immediately more comfortable.

The Story Continues in 2014
Beauty 10 year old Quarter Pony mare - suffers from EMS (equine metabolic syndrome).  Chronically foundered in all four hooves over at least 4 years.  Treated with correct ACT trimming strategy, first with boots, pads and casts with very good results growing in a new hoof capsule and thicker sole.  This took two years because while she was recovering from the founder, we were still making mistakes with her EMS and the special diet she required.  We knew the mare could not eat a lot of water soluble carbohydrates/sugars without it causing havoc with her hooves, but we didn't know that certain other feeds were taboo. ie. anything that raised her oestrogens would cause the mare to founder - again. So we learned that soy products & copra (raise oestrogens), haylage causes a fermentation type reaction in the hindgut and that effects the hooves negatively etc.  Then there were the times that the pony broke into the feed containers (like a vacuum cleaner on legs) and when she escaped from the paddock (power not turned back on to electric fence) which permitted the highly intelligent pony to freely graze the sugary spring grass instead of being in her dry paddock eating her Rhodes grass hay). Then there were the grazing muzzles that the mare learned very easily how to remove by laying down and doing a few Houdini moves, dismissing the muzzles in minutes.  In emergencies like these, we learned how to react quickly to the threat of another episode of founder.

While the mare is still not sound on hard ground or gravel, she is able to walk well on soft ground/grass even while she is unshod, but after fitting Epona shoes on the front hooves only, the mare is able to be ridden normally without any hint of pain or tenderness. She's active and pain-free and growing a heap of sole in the process of having fun.

The Eponas permit the mare to get the circulation and movement she needs to build thicker sole and a solid, well attached hoof wall.  This pony has Secretariat in her ancestry and she is FAST when she gets her Eponas on.

This mare's success story is one reason that we actively promote Epona shoes as a valuable aid that can be used to help address various types of lameness in horses. 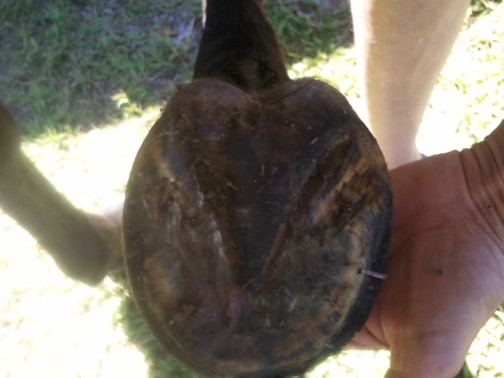 Bulging soles show that the coffin bone was not in the correct position in the toe stay, but the bone had rotated and its tip was pointing painfully into the sole.   Some cracking of the sole near its junction with the hoof wall, threatened sinking of the coffin bone through the sole.  Quick corrective action using casts, pads and boots and magnesium chloride and essential oils (anti-inflammatory/painkilling) gave support to the sole and prevented sole perforation. 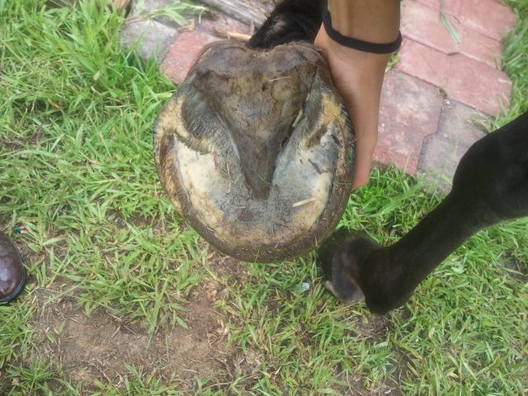 Black hooves should be black on the underside too, but see the white/yellow areas?  Laminae Serum (white/yellow) oozed into the hoof after the founder attack, to literally glue the hoof together after the dermal laminae separated from the epidermal laminae, resulting in large laminar wedge at toe. 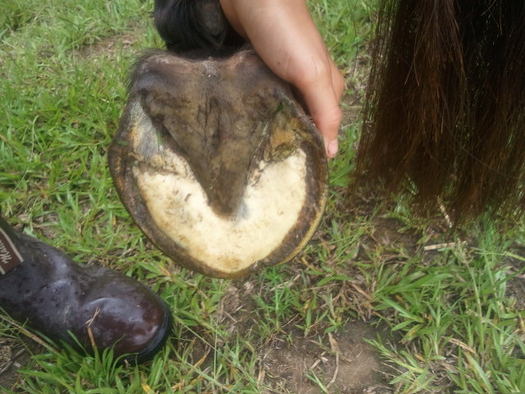 Photo taken prior to regular trim (after heavy rain).   Flares have given the appearance of this hind hoof, the shape that closely resembles a front hoof.  Lamina wedge needs to grow out.   Overlaid bars.  Lot of white/yellow laminae serum to hold hoof together.  Hoof was trimmed gradually over a period of months to the anatomy of the internal hoof.  Demonstrating wide frog, well defined central sulcus, and heel buttress - good landing surface, good ground contact. 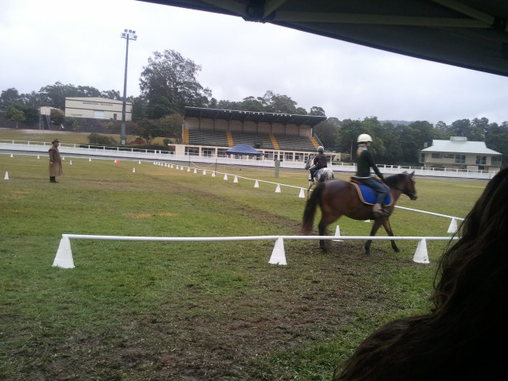 Same mare as above.  Dressage training - 4 day pony club camp. The mare didn't drop her shoulder in the corners but stayed beautifully rounded.  She did lovely extended trots also. She was booted with Cavallo Sports boots on the front hooves only.


Currently galloping under saddle - no sign of a limp, using boots for rough surfaces.

Pony with EMS - Equine Metabolic Syndrome. She was made comfortable and her hooves are healing with casts, pads and boots.  Diet specifically avoids sugar and grains. 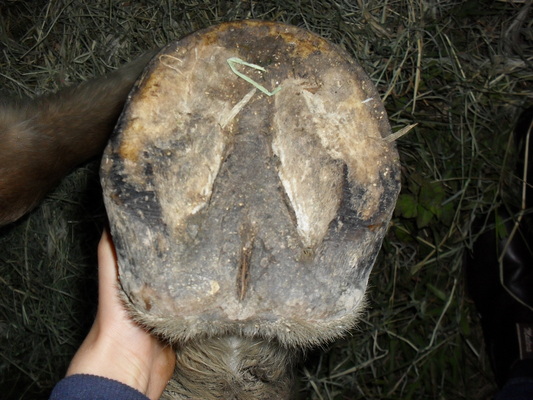 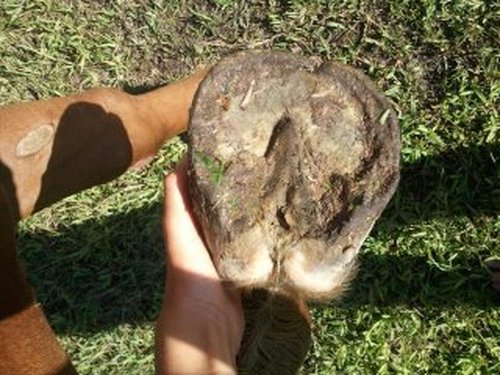 Appaloosa gelding being trimmed in the paddock 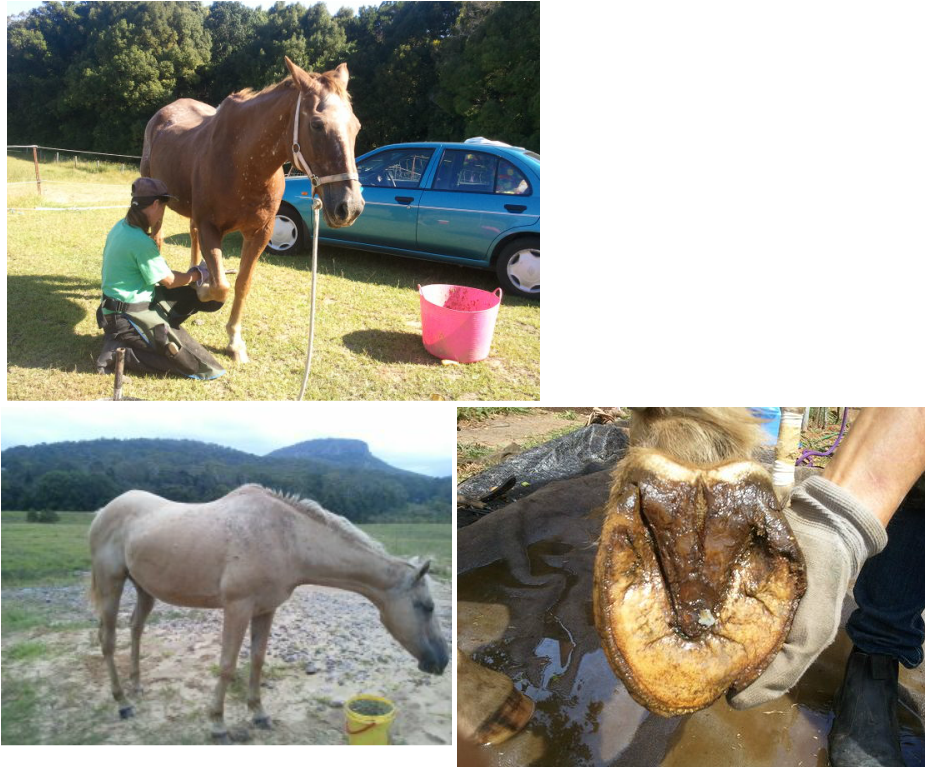 Hind right -
18 year old mare - medio-lateral severe imbalance.  Injury to the muscles in the sacro-illiac section of her back caused her to favor the hind right and as the injury was not addressed, her hooves adapted to support the new posture. Inside the hoof capsule,  Medial (inside) bar and wall was consistently left high and this caused the lateral (outside) wall to collapse, drag the heel forward and be crushed and for the internal hoof capsule to twist. No x-rays taken, but very likely the coffin bone is also twisted causing breakover to be on the lateral quarter and straining the deep digital flexor tendon.  In 2014, Louis Lintner treated this mare with remarkable results.  It was his opinion that the mare had suffered an injury to her spine.  He suggested that a likely scenario would have been that the mare was travelling in a horse float with her tail hanging outside the float at the time when she fell over in the float.  Her tail being forced up as her body fell down could have caused her injury.  We will never know as this mare came to us already injured.

Standing in a Box - Sore Heels, leaning onto Toes 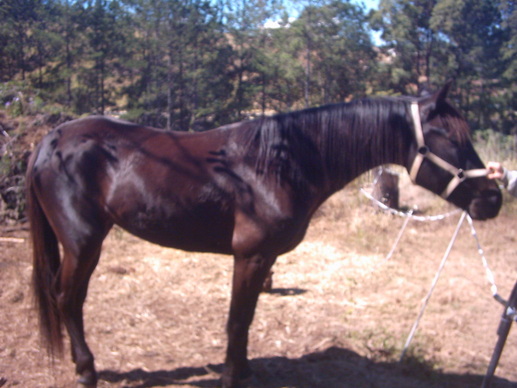 Standing in a box.  Horse was diagnosed with a club foot, but it needed to be mapped and trimmed accordingly.  This horse stance also indicates muscular soreness in the shoulders and wither area.

To make the underrun heels come back to their correct position, the toe wall (and often some toe sole) must be rockered.  All leverage is taken off the wall at the toe.  Horse might need boots while the sole thickens and a calloused sole ridge develops in the correct position under the tip of the coffin bone.

Seedy toe must be removed and with an anti-bacterial/anti thrush solution.  We also pack the hole with a germicide.  Sand cracks need to be carefully monitored and the wall involved relieved of any weight-bearing.  This crack eventually grew out. 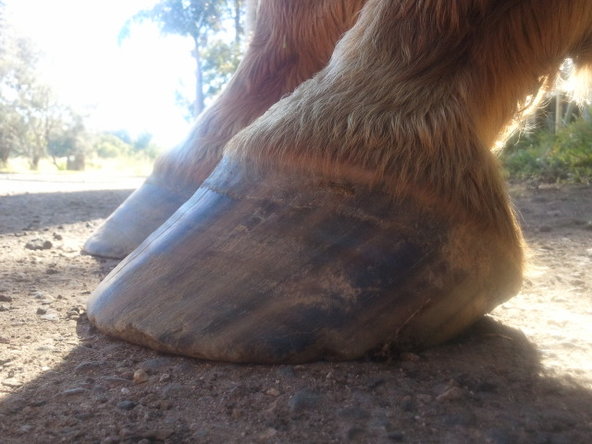 Collapsed heels. Serum laminae is produced by the white line to try to stabilise the hooves, but this emergency measure on behalf of nature, traps the internal hoof in the wrong position as the new hoof wall grows.

Angle of tubules show how stretched forward the toe has become and how far under the heels have been dragged,  The quarters are buckling - which is in reality, the sign of its inability to carry the horse's weight at that angle.

We do not rectify this deformity by 'trimming from the top.'  That weakens the hoof wall.  We apply the ACT and pillar trim - a technique from the 1800's but which Linda Harris has studied and re-presented.  This horse grew wonderful thick sole and his hoof walls angled up very nicely.  Prior to being sold to the doggers, this stock horse was working cattle. We rescued him out of the dogger pen and it was obvious that he suffered neglect and he almost had pixie feet -  forward foot syndrome.  After 8 months of trimming his hooves began to take on a much better shape and he travelled much more comfortably, even managing to travel over gravel and, despite his age, delighted himself on several occasions, by rounding up the stray cattle - at a very fast canter -  with a 13 year old girl on board. Not bad for 22 year old gelding who not long before had a hard time hobbling over a gravel road.