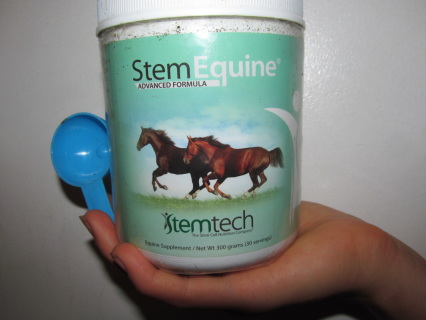 StemEquine - Out of stock - being reformulated

StemEquine® is an all-natural stem cell enhancer for horses. The supplement is the specially formulated equine equivalent of StemTech's patented stem cell enhancer (AFA Concentrate) for humans, documented to support the natural release of adult stem cells from bone marrow.

Purchase StemEquine more economically by becoming a VIP customer. Discounted price available. Click on the VIP Customer button below for more information.  Opens in a new window.  Then select Shop and then VIP Customer Sign-Up.  International shipping is not available.
BECOME A VIP CUSTOMER

SNAKE BITE
An 18 year old gelding was purchased on 10 Feb 2013. These are photos taken on his first day with us. He was underweight and had lost his topline.  The top eyelid on his left eye was half missing.

On 15 March 2013, roughly 5 weeks after purchase, the gelding was bitten on the top lip by a black snake.


This bite caused the horse to go blind.


The horse was very weak and our vet was surprised to see him standing up. The vet administered pain killers and anti-inflammatory drugs, then he applied medication to his left eye because it had developed a corneal ulcer.  This helped with the pain.


In the first three days the gelding was very distressed and we watched as he struggled to adapt to his blindness.  He left patches of round bare dirt made by his constant turning which revealed that he was suffering from major psychological stress, no doubt from having the expected difficulty experienced in trying to adjust to being blind.

The horse lost his appetite and physically could not eat due to his facial swelling and from stress, so he lost weight very quickly despite us hand-feeding him soft foods.

After he began to eat independently again, we tried putting him with another calm horse, but he was exposed to bullying as he was the lowest ranking horse and he could not see when he was told by the more dominant horses  to move out of the way.  (See bite/kick marks in photo).


There was talk about euthanising him to end his distress, however, as a last resort, we supplied a goat as a companion and he settled down and began eating again by himself.


The gelding regained some sight in his left eye but is totally blind in the right eye and the vet is not sure how good his vision is in his left eye.

The gelding's appetite improved but remained reduced for several months after the snake bite incident, but then we were Introduced to a product called StemEquine - a nutritional supplement which was said to increase the number of adult stem cells that the horse usually produces.

AFTER adding StemEquine to the diet

Within 24 hours of adding StemEquine to his diet, this gelding was eating 'like a horse!'  His energy increased and after 5 doses of the supplement (one scoop per day) we began to notice that he was actually putting on a little bit of weight, although there had been no other change in his diet.  His coat colour deepened and we are keeping an eye on him to see if his blind eye shows any signs of recovering sight.  At present, he is still unable to see anything, even movement out of the right eye.

The gelding has put on condition and improved his topline without any other changes to his diet except for the addition of the StemEquine.  We are very impressed with this product.

The gelding has now become well enough adjusted to his blindness that we have been able to move back in with the herd, although he still occasionally receives the odd kick or nip.  He is still a gentleman of a horse to ride though we are very careful to be his 'eyes' on the blind side as he can become frightened if he is touched unexpectedly from that side.  He's a beautiful boy!

AFTER StemEquine was added to the diet
(As tried in the past, these horses were again initially treated with Ivermectin paste and topical treatments in case there was an infestation of parasites lurking on the skin (lice), or embedded under the skin (mites).  This treatment showed a definite improvement in the skin, however the condition kept recurring unless the solution was reapplied every week.  We rugged both horses to prevent the already injured, rubbed-raw skin from receiving additional damage, hoping that the rugs might present an opportunity for the skin to heal.  Sadly, the horses were still very itchy and they particular rubbed their necks and tails on hard objects in the paddock.  After introducing StemEquine into their diet the itching noticeably decreased and their appetites and energy levels markedly increased.  The increased energy was most noticeable in the older mare but both mares have shown a marked decrease in itchiness and an amazing improvement in the condition of their coats.  - October 2013)

Not a complete recovery, but well on the way! 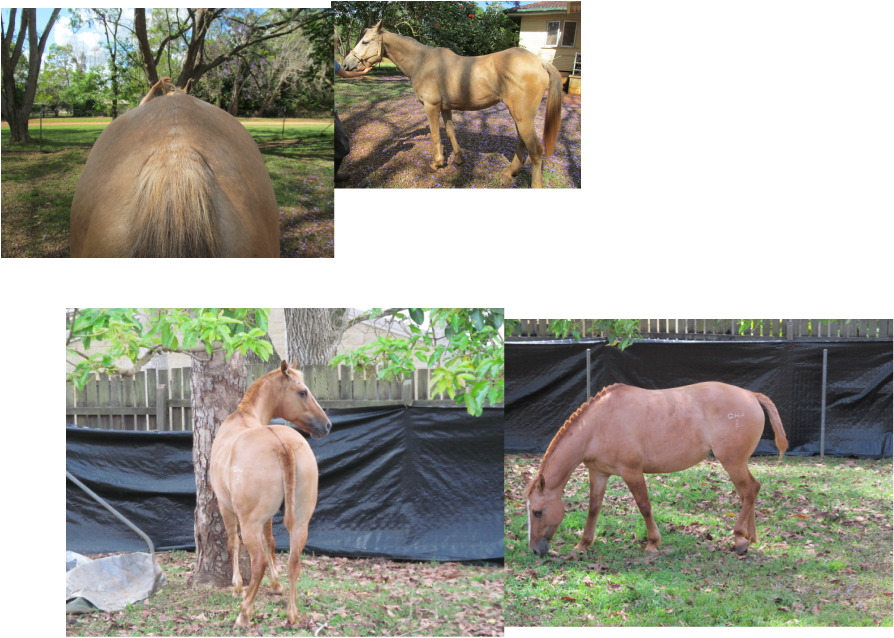 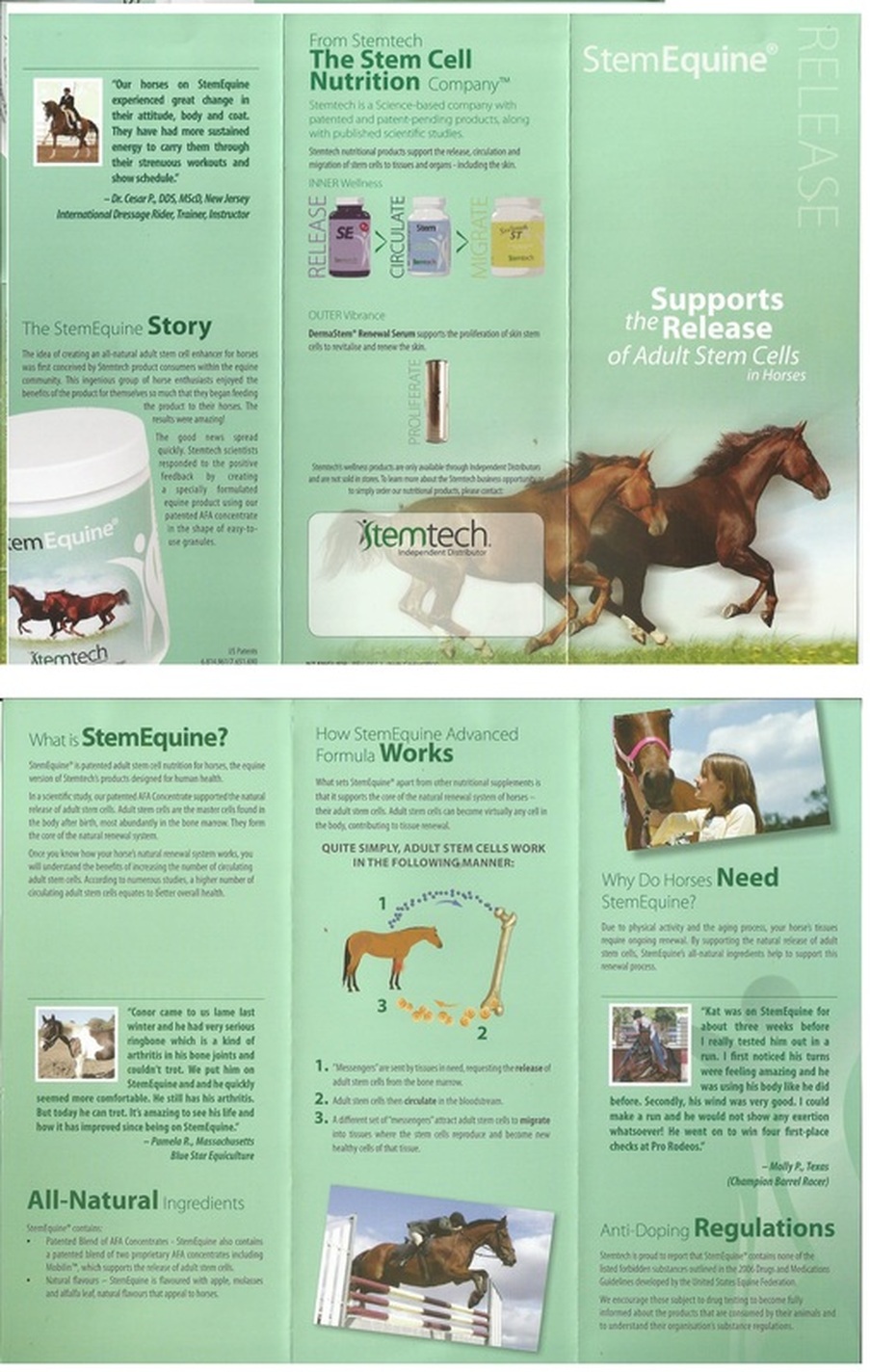 StemEquine is a nutritional supplement for horses.  It is produced by StemTech
More information and StemEquine supplies available here: http://zsgoodhealth.stemtechbiz.com.au/StemEquine.aspx

More Info on Stem Equine
Purchase Stem Equine
DISCLAIMER
“STEMTech in no way claims that its products will treat, heal or prevent any disease to heal any diseases, alter the size, structure, shape or weight of the human body or the equine body or preventing or interfering with the normal operation of a physiological function.”

"Horse Sense Australia or its promoters in no way claim that StemEquine or any other product mentioned on its websites will treat, heal or prevent any disease to heal any diseases, alter the size, structure, shape or weight of the equine body or preventing or interfering with the normal operation of a physiological function.”