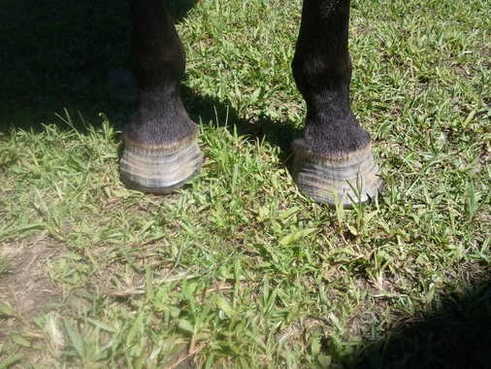 Laminitis is inflammation of the laminae - the tiny structures of the hoof that join the insensitive inner hoof wall to the coffin bone inner hoof capsule.The healthy hoof possesses a natural function by way of a mechanism that exists which allows the coffin bone to be securely attached to the hoof wall, but also allows the hoof wall to slide over the bone as it grows. There is a layer of laminar (lamellae)- small leaf like threads - that attach the coffin bone to the outer hoof wall.  The laminar layer can easily be seen on the sole and it is then called the "white line," and it lies inside the outer hoof wall. It is usually actually a yellow colour as the white material oxides and appears yellow when it reaches the bottom of the sole.  The white line actually consists of two layers of laminae, one layer attaches to the outer hoof wall and one attaches to the corium which itself attaches to the underlying coffin bone. The position where these two layers of laminae connect is alive and in motion. For the hoof wall to grow and move down the foot while continuing to hold its attachment to the coffin bone, it requires an active process which involves numerous microscopic 'leaves' - which are actually live tissue - between the coffin bone and outer hoof wall.  Innumerable numbers of living cells form connections like Velcro and these cells respond to chemical and electrical/nerve signals made by the body and tissues in the hoof including toxins.

An excellent explanation of laminitis has been given by veterinarian Doug Thal and is partially quoted below:

I like to use Velcro as a model to illustrate the laminar layers. Imagine the coffin bone glued to the soft Velcro layer. Now imagine the outer hoof wall glued to the rough Velcro layer. The Velcro surfaces come together at the white line. Now imagine that there is precise control of this attachment which allows limited sliding of the hoof wall over the coffin bone. Tiny releases and reattachments constantly occur to allow the hoof wall to grow down from the coronet band (the hairline of the hoof).  Protruding into and between these laminar layers is a fine web of tiny blood vessels that bring oxygen and other essential nutrients to the cells.  At any one time, the cells making up these fingers are mainly adhered to one another. Precise control of the laminar cells allows movement of the hoof wall along the coffin bone while never completely releasing it and thus never allowing it to alter its position within the foot.  The Mechanism of Laminitis The word “laminitis” means “inflammation of the laminae”. It is a disease that involves dysfunction of this unique system of attachment. It can progress to allow complete breakdown of the structure of the foot.  The old mechanism for laminitis that I learned as a vet student involves blockage of the circulation to the laminae, leading to cell injury and stretching of the laminar attachments. New research has shown that certain biochemical “laminitis triggers” can cause over-activation of this release mechanism, allowing the coffin bone freedom to move within the hoof. Horses undergoing undergoing this "over-release" show the signs of laminitis. Doug Thal, DVM,, "Laminitis: New Ideas on a Devastating Disease Part One,"  Thal Equine, Taos, New Mexico, Printed in Today's Horse Trader, Vol. VIII, No. 8, August 2005; http://speakingequine.com/articles/lamintitis.htm


Laminitis can be caused by hormonal issues or by mechanical means, chiefly by poor trimming strategies that insist on removing the heels.  The heels are lowered in order to force 'frog-ground contact.'  This is insane and extremely cruel.  Many barefoot trimmers have been taught this trimming strategy as part of the Strasser trim but it is based on incorrect studies on the anatomy of the hoof.  Removal of the heels sometimes down to the periople, indeed cripples the horse and can certainly cause mechanical laminitis.  This type of laminitis does not respond to a change in diet or in drugs (peroglide).  It can be treated and the horse relieved of its suffering while the heels are allowed to regrow.  The heel buttresses should not be removed.  Their purpose is to provide support for the heel bulbs and to allow the full depth of the frog and sole to develop.  When the heel buttresses are removed, the sole corium and the frog corium are crushed and they are unable to grow and perform their protective duties.  When the heel buttresses are removed, the sensitive structures of the internal foot are crushed and this causes pain such as navicular disease and also mechanical laminitis/founder.  When the heel buttress are allowed to regrow they again will offer protection to the heel bulbs, the frog corium and sole corium.  If permanent damage is not done to the coffin bone by the years of incorrect trimming, then very often the internal structures of the hoof are able to be realigned and the horse will grow more sole.

Regardless of how it is caused, laminitis is an emergency.  It can lead to founder (sinkers ie where the coffin bone penetrates the sole of the hoof) resulting in severe pain,  often with permanent hoof deformation and chronic lameness.  The condition is often fatal. Many horses and ponies are euthanised when severely affected by laminitis or founder.

Laminitis is an emergency regardless of how it is caused and the hoof treatment is the same in the short term, but long term treatment of the laminitis differs depending on the cause of the condtion.

At Horse Sense Australia, we have been able to assist in saving the lives of several horses that were suffering from founder and laminitis from both hormonal and mechanical causes.  Ongoing care is needed to ensure the issues that caused the laminitis initially are not repeated.    See the journey of one pony that was rehabilitated by HSA from 4 foot (hormonal induced) founder here: https://www.horsesenseaustralia.com/corrective-trims---testimonials


Do You Know How to Recognise, Treat and Prevent Laminitis?
Dr Don Walsh sets out how you can learn what causes laminitis and what First Aid measures can be taken to treat laminitis and also he outlines proven preventative measures in the a short video summarised below http://hoofcare.blogspot.com.au/2012/09/laminitis-ppid-cushings-insulin.html

There are 3 different pathways to develop laminitis.


Also, in our experience, hooves that are afflicted with forward foot syndrome are far more prone to develop laminitis than well-maintained unshod hooves, however club feet and bullnose hooves often also suffer laminitis but the inflammation occurs higher up in the hoof wall, and not at the toe as it does with the underrun, run forward foot.


Disclaimer:
If you are concerned about your horse in regard to laminitis or founder, please contact your vet immediately. Horse Sense Australia are not veterinarians and we do not publish or offer  veterinarian or medical advice.  This summary is not to be considered advice, diagnosis or treatment for any horses. Nothing said or written on this website is meant to diagnose or provide a cure for any medical disease.  It is meant to provide horse owners with links where you can obtain material to educate yourself from medically qualified experts.  For all your animals' health concerns, please consult a qualified medical practitioner eg a vet.

Note:
​In laminitis, the heels appear to grow too long or too high. In laminitis and founder, the heels are pulled under the hoof toward the toe and the stretched tubules are forced into an unnaturally low angle. We find that keeping the heels higher than usual gives the frog enough space to develop without the frog corium and the sole corium being crushed. When inflammation decreases after the initial lamanitic episode, Epona shoes also give welcome support and stimulation to the developing frog. Much danger is done in taking down the heels in the case of founder/laminitis or in the recovery stage while the new hoof capsule is growing down from the coronet band.