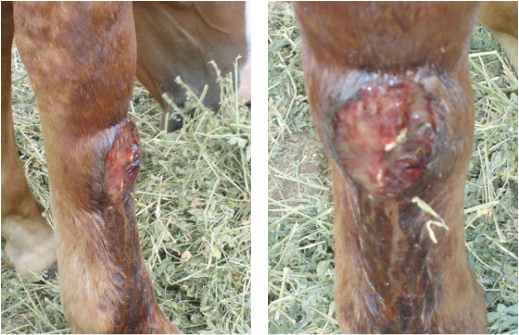 Common Digital Extensor Tendon severed
Zekiah 16 month old dunalino Quarter Pony filly - injured herself by means unknown to us while she was in the paddock. This photo is before any treatment was given. Filly was displaying distress, knuckling over on the fetlock when trying to walk because the Common Digital Extensor Tendon was severed. After the wound was washed, rinsed with mildly salty water then diluted pain-killing, anti-microbial Young Living essential oils were applied.  The filly showed rapid relief from pain - within minutes of application.  Potato poultices were applied every 2- 4 hours for the first 3 days and between poultices the wound was sprayed with vegetable oil-diluted essential oils.  We also used Young Living's Thieves Domestic Cleaner on the wound, but this stung and we had to dilute it.  We recommend using the Klemens Equine Energiser for injuries like this to ease pain and increase circulation.  Although we didn't have access to a pulser for this filly, we have used it on other similar injuries with very positive results. 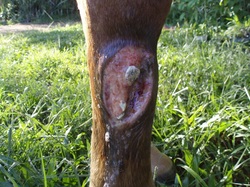 Severed Common Digital Extensor Tendon - after rinsing in saline solution.
Common Digital Extensor Tendon severed. The wound after 3 days.  Washed out with saline and regeneration essential oils. Photo clearly shows the empty channel where the tendon used to lie. The oils kept infection at bay and the poultices drained the debris away. Note the greatly reduced swelling.

Knuckling over at the fetlock - stopped after 3 days. 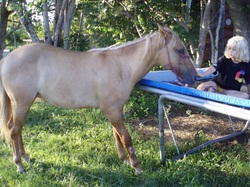 Zekiah - severed Long Digital Extensor Tendon
The fetlock knuckled over and Zekiah had to rearrange her hoof position again. Wound was washed with saline solution (salt and cooled, boiled water), then oil-diluted Young Living essential oils were applied.  Delivery was via a spray bottle. Wound was then poulticed with raw potato. 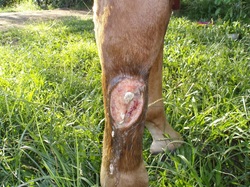 Wound filled in - 3 weeks after injury 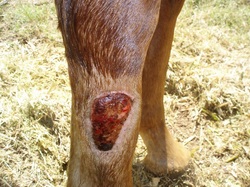 3 weeks later. Wound healing rapidly potato poultices and essential oils
Common Digital Extensor Tendon severed - Zekiah - Healing up very quickly with no sign of proud flesh. 3 weeks after the injury was sustained. Certain essential oils are said to prevent proud flesh growth to which horse leg injuries are very prone. The oils and the poultices have done a great job here. No drugs - (i.e. no anti-biotics, no anti-inflammatories, no chemical/drug pain-killers) just essential oils and potato poultices. Pain was relieved, wound did not become infected, however, the filly  received a tetanus anti-tox injection). 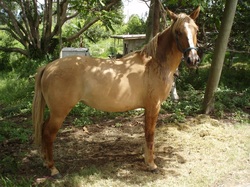 Standing well. No knuckling under
Common Digital Extensor Tendon severed - Zekiah - cooling down. The wound on her right foreleg has healed. There is no weakness in the limb - no limp, no soreness and no hoof deformity. The wound did not become infected but some scar tissue has resulted. Perhaps some lemongrass might assist with that. Still, we're very glad to have been able to have such a happy ending thanks to the essential oils and potato poultices. 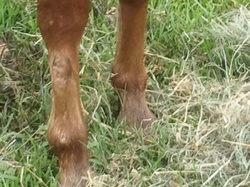 Hair growing over scar
7 January 2011
Zekiah's Injured Foreleg 23 months after initial injury in Feb 2009. (Common Digital Extensor Tendon severed). Not a show horse any longer, but solid and sound. Hair growing over the scar still patchy.  Flexion is not as good as extension as the tendon is tight.  Will see if it lengthens with lemongrass essential oil. 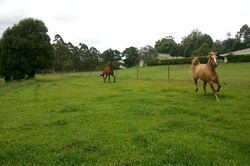 All gaits sound.
Zekiah's injured foreleg 23 months after initial injury in Feb 2009. (Common Digital Extensor Tendon severed). Leg is solid and sound. Just prior to being saddle started at 3 years old. No limping.  No lameness in any gait. 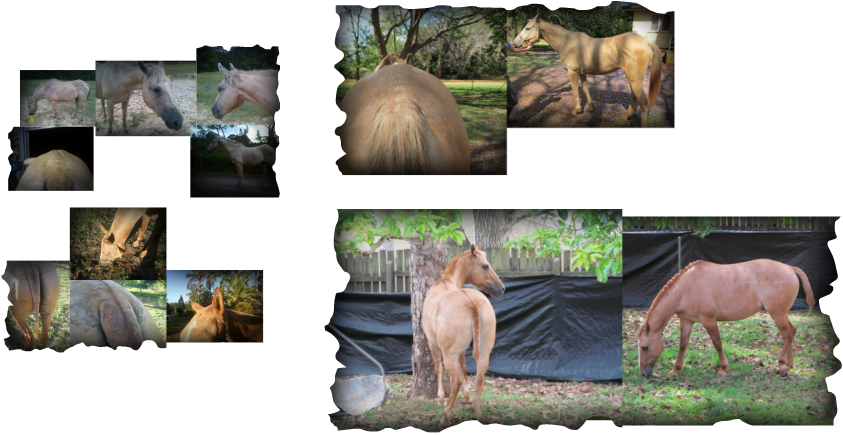 It appears that research using whole and ground linseed/flaxseed improves allergic skin reactions such as Queensland itch.  If linseed oil/flaxseed oil is used, two vital nutrients appear to be missing and the result is not as positive. 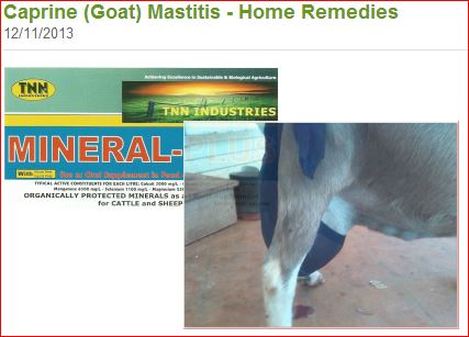 We keep a milking doe so that we can feed orphaned rescue foals.  She is a 6-litre-a-day Toggenburg doe.  The goat's babies, her kids, do not get robbed of their mother's milk as she has tons of milk - much more than her babies need.  So we use the excess for orphaned foals. Our beautiful doe is currently heavily pregnant and has only 1 month to kidding date.   We tried to do the right thing by the goat to give her a break from milking and to let her developing kids get the nutrition they need from their mother before being born. While we weren't successful in properly drying up our goat's milk, we were successful in inadvertently helping her come down with a severe case of mastitis. Our poor goat!  She became feverish and her udder also was very hot to touch and we felt hard lumps in her udder.  Her milk had become very thick and we could not milk one of her teats out for more than 3 small squirts.  Our poor doe was in pain when we gently massaged her udder to try to break up the lumps.  As the doe was heavily pregnant, we were cautious about using antibiotics so we were motivated to avoid using them if at all possible.  We consulted with our vet and got the antibiotics just in case the natural alternatives that we wanted to try, didn't work quickly enough to keep the doe comfortable.  Firstly we prepared a cabbage leaf and potato poultice which we strapped onto her udder using a pair of pantyhose to take out the heat and to start breaking up the lumps.  (see photo).  This was a major engineering feat!  After the poultice, we treated her teats with VERY diluted essential oil infusions which were syringed into both teats (not using the sharp needle, but just the plastic syringe tip which did not cause her pain.  The essential oils were diluted with lots of organic olive oil).  We also gave her a drench, (similar to the Pat Coleby treatment) made up o: 1 x  dessertspoon of of Vit C powder (sodium ascorbate) and the same amount of dolomite.  We added 10 ml of TNN minerals for sheep and goats and 20 ml of apple cider vinegar and some molasses to make the drench more palatable twice a day for the first 3 days. We gave this mixture orally, dissolved in 160cc of water.   We rubbed diluted essential oils on the doe's udder and gave her about 15 drops of the same oil mixture in an oral drench too.  The essential oils are 'hot' oils and had to be VERY diluted with olive oil before being applied to the doe's udder and drench so that she did not get burned. We also applied apple cider vinegar to the doe's udder, which a goat breeder told us was effective too.  After one dose, there was a noticeable improvement.  After the third dose it was very marked and we were able to milk the infected teat much more easily, getting about 12 squirts.  This was very encouraging to see after only 24 hours on the alternative treatments.  The essential oils we used were all from Young Living Essential Oils: oregano, peppermint, thyme and wintergreen.  The goat is much happier and hopefully she will be totally over the mastitis in time to feed her kids. . 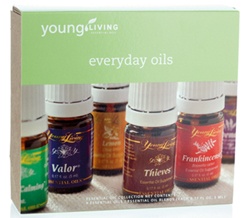 We use Young Living Essential Oils for various different ailments as listed below:  Note that we DILUTE all these oils before application - with pure, cold pressed vegetable oil such as coconut oil or olive oil  (NO CHEMICAL EXTRACTIONS OR SOLVENTS in the vegetable oil or these chemicals will be carried with the essential oils into the bloodstream.  We do not use inferior quality essential oils.  They have not worked for us and we fear that the inferior quality oils can poison your horse and you by transporting chemcials into your body or your animals' bodies!):  We are not veterinarians, but we know some vets who are using these Young Living essential oils.  One vet, Melissa Sheldon has just published a Desk Reference using Essential Oils for animals. 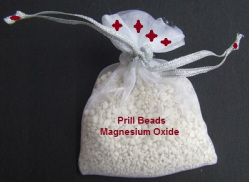 Prill beads are said to energise ordinary (filtered or purified) water so that the water molecules are more easily able to pass into the cells.